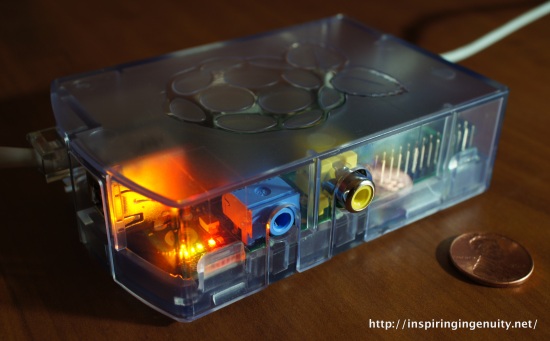 My wonderful wife Nathalie surprised me this Christmas with a new computer!  That makes it sound like so much more than it really is though…  She gave me a Raspberry Pi, which is, by design, the most inexpensive fully functional computer ever, and maybe the smallest too.  It really was an awesome gift though, because a true geek loves nothing like learning, and the Pi is the ultimate learning/teaching computer.

I am not sure the kids were quite as thrilled as I was when I plugged it into the TV on Christmas day – the Pi pretty much only supports HDMI output and I didn’t have a monitor that would support it.  Fortunately my good friend Adam Riley previously wrote a blog post on setting up remote desktop access to a Pi.  Once I had things set up that far I could unplug the TV and set the thing up on my desk without a monitor (or keyboard) and remote to it from any computer in the house.

You have a choice of a bunch of different operating systems to run on the Pi, but all of them are based on Linux.  This is really good timing, because I need to learn more Linux.  I have of course been aware of Linux since sometime in the mid 90’s, but I have never used it for my day job.  Periodically I have taken an old computer and set up Linux on it, but it always takes up so much space and consumes a ton of power.  After a few weeks of not using it much, I end up unplugging it never to see it again.  With the Pi, I don’t have to worry about power or space.  Its sitting on the back of my desk and is so small I don’t notice it.  And as far as power, it’s powered by a spare USB port and probably drawing 2.5 watts or something.

In order to learn something, you have to have a project.  My goal for the Pi is to set up a public web server sitting on my desk that does something with geo-spatial data.  So look forward to another few blog posts about setting up a live web server on this tiny computer and eventually a link directly to it.